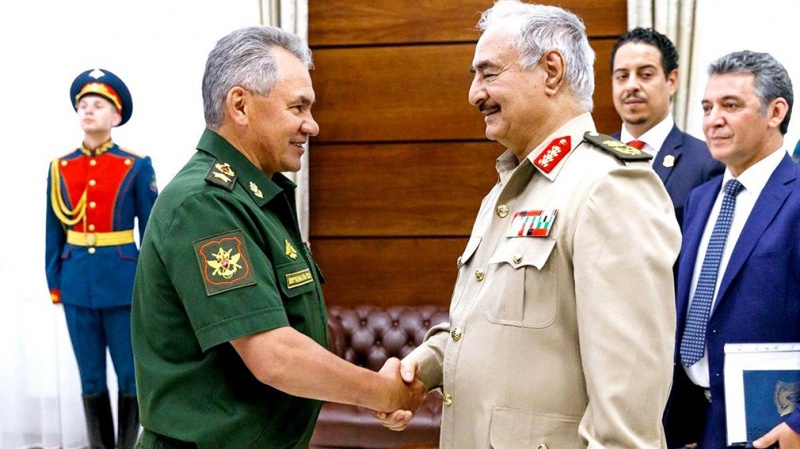 BENGHAZI – The General Commander of the Libyan National Army (LNA), Field Marshal Khalifa Haftar, announced on Monday 27 April،  that LNA will take charge of Libya’s affairs in response to nation-wide protests calling for authorizing the army to run the country.

In a televised address tonight, Field Marshal Haftar declared the 2015 political agreement, which paved the way for forming the Tripoli-based Government of National Accord (GNA), to be dead after thousands of protesters from across the country took to the streets in the past few days to reject the failed agreement.

Despite being recognized by the United Nations, GNA was never given the vote of confidence by the democratically-elected House of Representatives.

The Tripoli-based government led by Fayez Al-Sarraj succumbed to lawless militias and failed to solve any of the country’s security, economic, and political problems.

In a country torn by lawless militias, extremist groups and corrupt politicians, many Libyans view the LNA as a unifying and trusted institution.

A survey conducted by USAID in 2017 found that Libyans trust LNA more than GNA or any other governmental organization in the country.

“We will be at the service of the people and we will to the best of our abilities to relieve their suffering,” Field Marshal Haftar said in a short televised address tonight.

“Serving our citizens and harnessing the capabilities for their benefit will be among our top priorities,” he said before adding, “We will work to create the conditions for establishing civil institutions”.

Since 2014, LNA forces has been battling militias and terrorist groups which became the source of chaos in Libya following the overthrow of Muammar Gaddafi in 2011.

After being granted authorization by the House of Representatives, LNA expanded its territorial control of the country as it continued to wipe out militias and terrorist groups in eastern and southern Libya.

In April 2019, the army launched a military operation to rid Tripoli from militias. Al-Sarraj saw the move as a threat to his already-weakened government and decided to forge an alliance with those militias.

Field Marshal Haftar concluded his speech by affirming that LNA “will continue to pursue the liberation process until its end”.